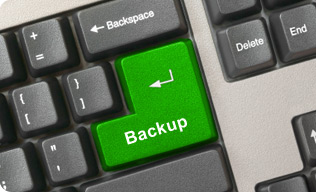 The average business has $30,000 worth of computer data and we have found that many of them have little or no protection at all.
To a business owner, your data is priceless. The loss of your data can put you out of business.
Switzer Enterprises uses the Internet to send copies of your critical data to our off-site data storage facility, every night, automatically. The system is affordable and secure!

Services and Plans
Switzer Enterprises is committed to providing highly effective backup systems to all customers, from the one-person business to multiple office businesses with highly complicated business needs. We have created the following backup services to accommodate the needs of a wide range of businesses:
Personal Backup Plan - Perfect for professionals, telecommuters and small offices with a few key files to protect.
** Only $19.95/month ** for up to 100MB of data. Unlimited file backup/restores
Professional Backup Plan -  Complete protection. Same as personal plan plus monitoring, free technical support for recovery and up to 1.5GB of storage.
** Only $119/month **
Office Backup Plan -  Backup your entire office. Same as professional plan plus server backup and multiple workstations up to 6GB of storage.
** Only $159/month ** plus hourly setup charges
Custom Backup Plans -  Create your own backup system customized to your specific needs using our products and expertise. Our backup products can be installed at your location. Considering a business might pay an employee $12 per hour to perform backups, 5 days a week, for 1 hour per day, their cost would be $270, that's a savings of up to $195.00 per month! You also have the added assurance that your data is completely secure offsite.

How valuable is your data? Can you afford to trust your data to just a tape system or a backup service that is geared to quantity instead of quality? We offer daily backups, notification of missed backups, a full month of normal business operations (20 full backups) retained on our system and FREE technical support - all for one low monthly charge!
*Additional $5/GB CD charge for backup sets over 5 gigabytes

Q: What if we already have a Zip drive?
Frankly, we believe that it is not optimal for most users to use a zip or other removable disk media for backup. A remote backup service is completely automated and has the required file redundancy to protect important data. The only safe way to use a zip drive for backup is to have three disks and make the same backup three times. That way when one of the disk fails you are still protected.

Q: How long will a remote backup take?
Offices with high-speed internet connections should find this service comparable with tape drives. Dial up users will be able to do incremental backups in thirty to sixty minutes. The initial backup can take several nights to complete. We recommend backing up the most important files first and then selecting other files as the backup progresses. Or, the initial backup can be run over the weekend. Also, we can come to your office and make the initial backup of your system.

Q: Onsite, Offsite - What's The Difference?
Basically, remote backups work like regular tape backups, with one important difference. Instead of sending backups to a tape drive or other media attached to the computer being backed up, a remote backup sends encrypted file data over the internet to a computer file storage system safely off-site.
This usually happens at night while your business is closed and nobody is using the computers. It's completely automatic. In fact, you may forget it's working every night.

Q: Why Are Remote Backups Considered More Beneficial?
The data is immediately stored off-site using an automated backup system. Also, only an internet connection is needed. Completely eliminating the need for expensive backup equipment and media. And, since the system is automated, manual labor is eliminated.

Q: How Secure Are Remote Backups?
Very. All files are encrypted using Blowfish or DES encryption which is selected by the user with their own personal encryption code which is only known by the user of the system. Blowfish encryption has never been broken by a hacker. DES is used by the federal banking system.

Q: What is encryption?
Encryption is basically a mathematical formula that scrambles a data file. And the only way to unscramble it is with the encryption code.